You can use Beacon's merge functionality to merge several records into a single record.

Warning: Merging records is final and cannot be undone - make sure you're comfortable with what you're doing before you proceed!

Selecting records to be merged

How fields get validated and merged

After the merge is complete

Selecting records to be merged

From a list view, select the records that you want to merge. You can merge up to 10 records at once. Select Merge from the dropdown.

Beacon then validates the merge to determine if any more information is needed before the merge. If the records can be merged straight away you'll see this screen and you can go right ahead an click Merge to merge the records.

Choosing values for fields that can't be merged

The validation step determines if there are different values for the same fields across the records being merged.

If there are any fields that can't be automatically merged Beacon will prompt you to choose the values for them. Here you can see that we need to choose a name and a primary email address. 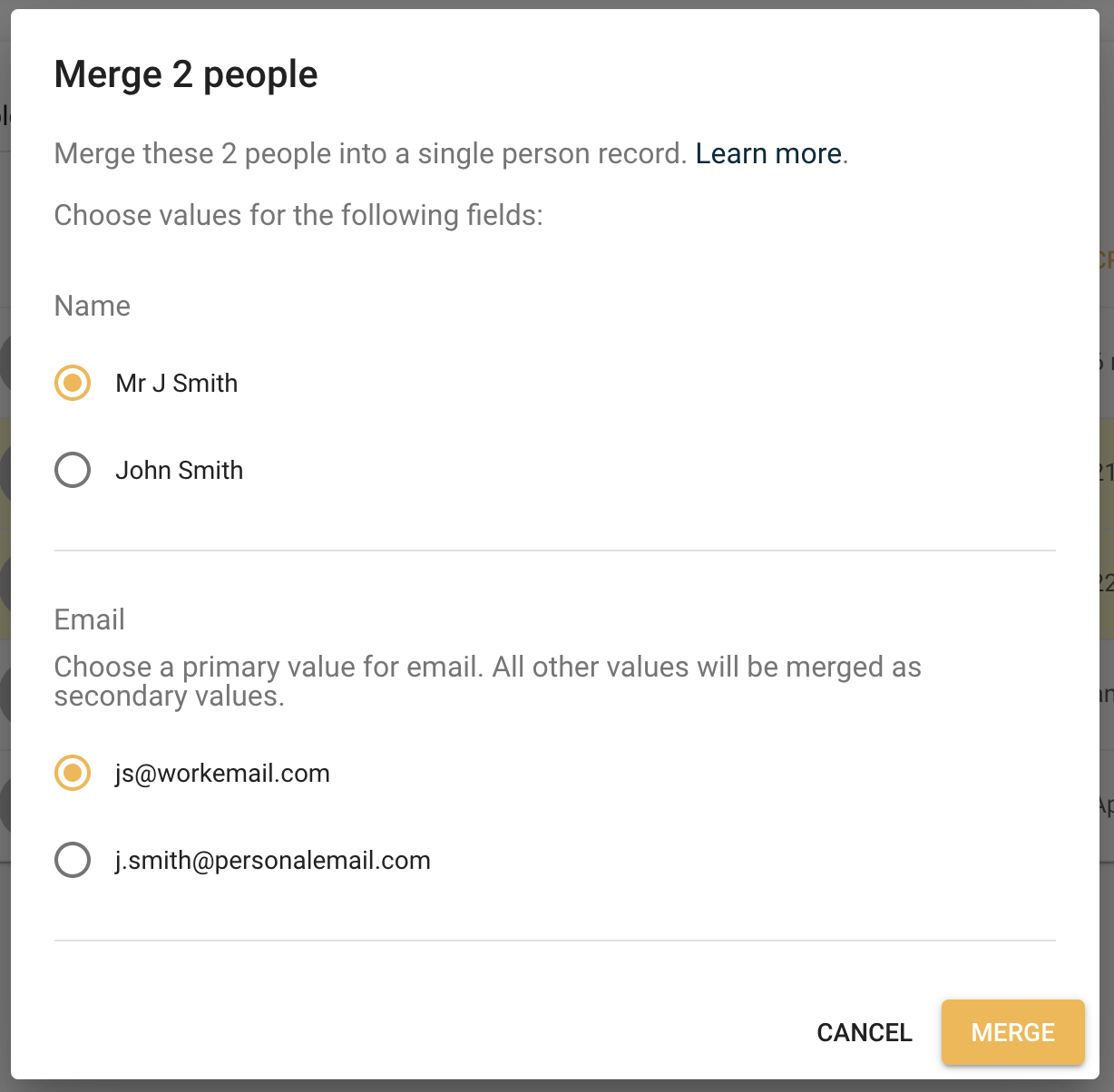 Once you've chosen all of these fields you can click merge to merge the records.

How fields get validated and merged

When we merge records we combine all of the available fields. How we combine the fields differs depending on the type of the field.

Here we describe some of the notable rules for determining whether values are different and how we merge those values.

When there are multiple locations available you will be prompted to choose a primary location. All other locations are then set as secondary locations.

Note: Notice that the primary location that wasn't selected is now a secondary location for the new record.

When there are multiple emails available you will be prompted to choose a primary email. All other emails are then set as secondary emails.

User selects [email protected] as the primary email for the merged record.

Note: Notice that the primary email that wasn't selected is now a secondary email for the new record.

If a drop-down list can have multiple values then all values across all of the records are merged.

If only one value is allowed then you will be prompted to choose one.

Files are always considered to be different because we don't know the contents of the file. Even if you are merging records with the same file attached to both of them you will be required to choose one file.

Point to another record

If a field can point to multiple records then all records are merged into this field.

If only one record can be pointed at then you will be prompted to choose one.

All related records are changed to point at the newly merged record. For example, if you are merging two people and they both have payments associated with them all of the payments will point to the new record after the merge.

After the merge is complete

After the merge is complete you will be returned to the list view and the newly merged record will be selected.

How many records can I merge?

You can merge up to 10 records at one time. This is to help prevent accidentally merging vast numbers of records accidentally!

I don't have access to merging records - why is that?

In order to merge two records together, you will need permission to edit ALL fields on that record (as you're making changes to the whole record). If you don't have those permissions, you won't be able to merge and won't see it as an option when you select your records.

Your account admins will be able to adjust your roles and permissions if needed!