The key differences between payments and subscriptions, and how they relate to each other

In Beacon, it's possible to store both "payments" and "subscriptions" in Beacon. These are related, but fundamentally different. In this article, we'll take a look into some of the differences, and how they relate to each other.

A payment reflects a transaction. For example, if a supporter donated you £200 in cash, you would save that as a payment in Beacon, including details like the donor or the amount paid: 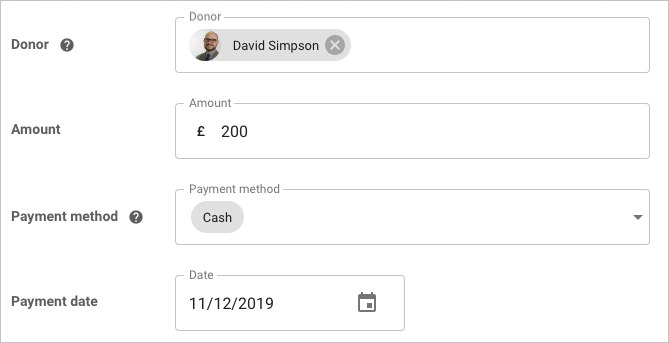 A subscription reflects the fact that someone is paying you regularly. It is not a transaction in any way - so it will not exist as an item on a bank statement.

Outside of the CRM world, good examples of subscriptions are things like:

In Beacon, subscriptions are most useful for reflecting:

For example, if David was donating £20 / month, this could be stored like so: 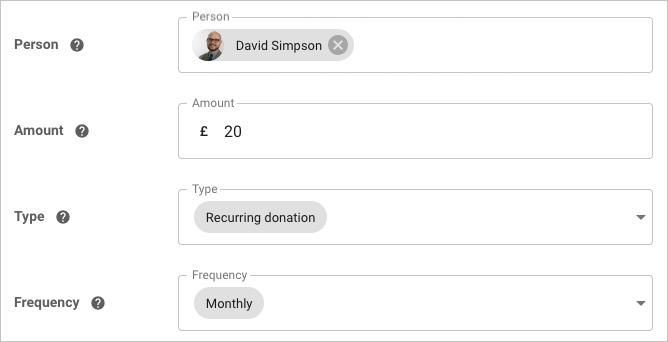 How subscriptions and payments relate to one another

In Beacon, records relate to one another by "pointing". On the payment record, there is a subscription field, which allows payments to point at the subscription they are part of:

As time goes on, more payments will be made as part of the recurring donation or membership, and these payments should all "point" at the subscription. 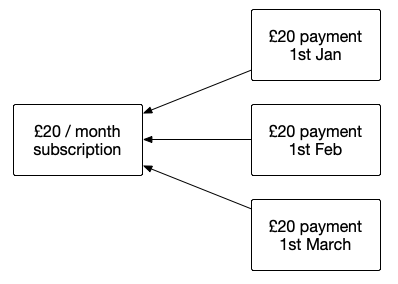 Also, it's worth mentioning that the subscription points at the person who is paying you regularly, and each of the payments point at that person as well: 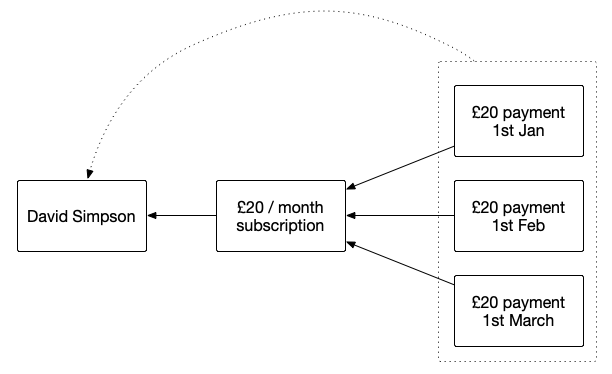 How subscriptions and payments are handled in Beacon forms

When someone makes a recurring donation via a Beacon form, a new subscription is automatically created for that person. (As well as actually setting up the subscription via GoCardless or Stripe)

As new donations come in, they are automatically added into Beacon, pointing at the subscription that was set up when the form was submitted.

As such, when looking at a subscription record, you'll see a list of the related payments (that is, the payments that are pointing at the subscription): 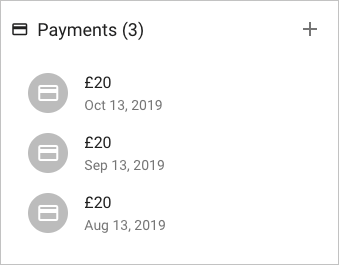 We've just received a recurring donation (from a standing order). How should this be added to Beacon?

As a payment. A subscription reflects the fact that they are paying you regularly, but a payment should reflect the actual transaction.

One of our supporters has just set up a recurring payment on a Beacon form via Direct Debit. Why isn't a payment showing on the subscription?

Direct Debits take a bit of time (~10 days) to set up. As such, if a supporter set up a recurring payment today, the payment wouldn't actually be "confirmed" in GoCardless immediately.