All Collections
Importing your data
Importing files to Beacon

Uploading files in bulk to Beacon with import templates.

Written by Chris Houghton
Updated over a week ago

Beacon makes it easy for you to attach files manually to records. You can upload these one at a time, but it's also possible to import files in bulk!

Your CSV column should contain file paths relative to where they are in your ZIP file.

Let's consider a ZIP file with the following files: 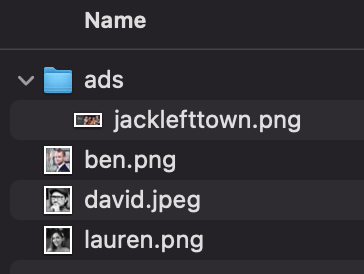 To upload these files to Beacon, your CSV file will need to include their relative file paths: 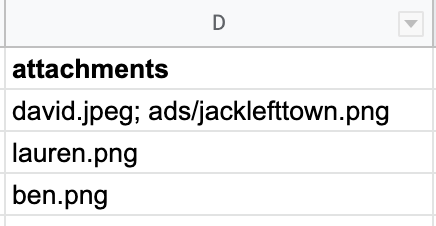 Beacon supports Windows, Mac, and Linux file paths by "standardising" them. We'll treat all of these formats as the same:

In short - as long as a david.png file exists within a team folder, then any of the above file paths will work just fine.

Beacon does not support "absolute" file paths. Below are examples of paths that are not supported:

If you need to create records in Beacon as well as attach files to those records it's best to do this as a two step process.

Import note: You will need some sort of duplication for this process. i.e. An ID for each activity.

When running your import, Beacon automatically validates the file paths in your CSV against the files in the ZIP file you've uploaded. We'll flag up any issues - just like with other field types! 😄

Multiple files in the same cell

Have multiple files in the same cell? They must be separated by either semicolons (;), pipes (|), or line breaks.

Note: unlike other fields in Beacon's importer, commas are not a valid separator for files (Lots of file names have commas in!).

Beacon lets you import ZIP files up to 50GB in size 😲. Keep in mind that the bigger your files, the longer your uploads and imports will take.

Also remember that for security, Beacon auto-logs you out after you've been inactive for 1 hour - so you'll need to be at your desk while your big files initially upload, but once the import itself starts it will continue to run in the background.

Currently, it's not possible Not possible to import multiple columns to the same file field. All files must be in the same cell.

Multiple rows to the same record

If you have multiple rows importing to a single record, Beacon will 'roll-up' these files.

Behaviour:
Beacon will import Charlie Smith once, with both Charlie's volunteer application and DBS certificate attached.

Currently, it's only possible to import to file fields on the exact record type you're importing to.

You are also not able to import files if your template has ANY mapping that is a step away. Follow the create and update tip in these scenarios.

For example, if you were importing people, you CAN NOT import to the person "Attachments" field, if your template includes mapping linking a person to an organisation.

Beacon ignores any files starting with a dot (.) - these are internal files.

Other files in the ZIP file